Joseph “Jo” Routens was one of the greatest makers of randonneur, cyclotouring and cyclosportif bicycles in all of cycling history. The only other name regularly considered alongside his more aged contemporaries, Rene Herse and Alex Singer, Routens was distinct from these seminal influences in his unwavering commitment to the everyday cyclist.

Initially through his partnership with fellow Grenoble, France businessman Roger Hugonnier and later on his own, Routens continued producing bicycles that shunned the sport’s elitist establishment long after securing prominence among the finest artisans in the field. It would be this intriguing blend of proletariat values reconciled with masterful skills that would come to define the brilliant but conflicted Routens manufacturing legacy.

The Routens competitive legacy is one of unmitigated brilliance. An enthusiastic rider of long distances, Routens first became known at Brevet de Randonneur Alpin (BRA) events between 1936 and 1938. Established by journalist Gustave Darchieux with the help of Routens himself, the BRA is noted for its traversal of the infamous Col du Galiber alpine pass standing at an imposing 2,645 meters. With only some distance cyclists using derailleurs at the time — with many preferring or relegated to dual-sided rear hubs with fixed or freewheel gears — this was no mean feat.

After making his mark at early BRA events, Routens rode professionally for builder and later promoter Lionel Brans in 1938 and 1939. His two years in Cycles L. Brans colors each brought a notable victory, the 1938 Critérium Cyclotouristique des Alpes and 1939 Grand Prix Duralumin.

The latter was an extended technical contest first held in 1935 to test both man and machine over hilly and rugged terrain. The year Routens won was a four-stage, 553km affair through the Vosges Mountains of eastern France. He competed against Alex Singer and sixty three other entrants, including no less than four Singer tandems — one a remarkable 13 kg specimen. The results went unnoticed because World War Two hit immediately after the cycling event ended.

Along with a great deal of credibility as a competitive cyclist, these wins and the group effort behind them cemented Routens’ reputation as a team player and valuable feedback instrument to his sponsor’s engineers. Nearly a decade later — after the brutal War had passed — his competitive and engineering prowess would continue serving him well.

Those qualities would lay dormant during the War years. Bicycle racing paused across the European continent with a few unnotable exceptions, including hollow editions of the Tour of Flanders and Paris-Roubaix spring classics. The Nazis attempted a series of bicycles races from 1942-1944 despite a distinct lack of trained, high-caliber racing cyclists.

Such attempts at boosting morale failed to convince nations wrecked by Nazi occupation that life was returning to normal. They were largely ineffective, with competitive racing only resuming slowly in 1946 into 1947. France was primed for a rebirth after the War and Grenoble did its part in the post-liberation cycling renaissance.

Its deep roots as an early source of bicycle innovation — extending as far back as A. Favre in 1867 — suggested the city might be a likely contributor. Situated at the base of the alps, summers and winters in Grenoble are each demanding in their own right, helping to provide a variety of year-round outdoor activities for taking adventurers.

Known amongst cyclists as having relatively flat terrain in and around the city that quickly gives rise to the surrounding alps — some of whose roads remain closed to eager cyclists from early fall through late spring — Grenoble also plays frequent stopover to the Tour de France. It is a picturesque setting that perfectly marries history and modernity against a gorgeous, timeless backdrop of scaling mountains. Truly the perfect place for an afternoon café au lait or metric century.

Jo Routens was born in Grenoble in 1913. While still a fiercely competitive cyclist there, he met one Roger Hugonnier just after the War in late 1945. Hugonnier was himself an avid barnstormer known throughout the region for chasing huge prize money aboard Libéria motorcycles, a Grenoble brand lovingly remembered as “La grande marque des Alpes Françaises.”

With his motorcycle racing years having passed, Hugonnier went looking for business opportunity and found it in motorless compatriot, Routens. Each sharing a similar passion for their art and craft, together they produced some of the most stunning (and winning) tandem and single bicycles ever built.

Their relationship lasted a fruitful five years and firmly established Routens as one of the preeminent builders and innovators in the cycling community. Routens bicycles were and are renowned for impeccable fillet brazing in a time when lugs ruled the day and the professional peloton along with it.

Elegant touches like wrap-around seat stays folded neatly together to form a forward point were found on better models, as were twin plate fork crowns that looked entirely distinct from more ordinary box crowns. These efforts not only exemplified a bicycle’s appearance but also added to its usability.

Bicycles meant to be ridden by stronger riders received supplemental tangs reinforcing the joints between the down tube, seat tube and bottom bracket shell. Braking innovations included rear cable routing through the seat tube and inward-facing rear cantilever brakes believed to have made many a happy “randonneur sportif.” Rounding out the short list of Routens advances was the twin cable front derailleur, an imminently sleek design mimicked by followers for years.

Routens piloted his own tandems to victory in the 1948, 1951 and 1956 Paris-Brest-Paris (PBP). The PBP has always been considered cyclotouring’s premier event among the sport’s elite. A grueling 1,200 km out and back between Paris and Brest held every four years, the timed event’s format and flavor have changed since its 1891 inception while remaining steadfast to its self sufficiency origins.

What is today an exercise in endurance and opportunity for camaraderie among hardcore enthusiasts was once the most important stage for leading constructeurs to flaunt their wares and occasionally physical abilities. Great builders like Ernest Csuka and Rene Herse used the venue and its visibility for product testing, marketing and sales. Still others like Louis Pitard competed successfully at the event on their own machines.

Jo Routens did all those things with authority, shattering records and advancing cycling’s state of the art with ritualistic regularity along the way. Maybe that’s why Routens was one of the only pilots Alex Singer would ride stoker for, according to Olivier Csuka at Cycles Alex Singer.

Routens’ most prominent PBP win would be with René Fourmy in 1951. Racing against challengers riding a Rene Herse tandem, the Routens-Fourmy duo would establish a course record that remained intact until a two tandem team finally broke it in 1999. Astonishingly, the three PBP randonnées Routens entered and won are the only on record where the men’s tandem team outran the winning solo rider to arrive back in Paris first.

A good deal of attention was given to the mindset and mechanics behind such wins, much of it by Routens himself. Perhaps most notable here is a now-famous article Routens humbly and lengthily penned in which he reviews his first PBP win as featured in the October and December 1949 issues of French cyclotouring magazine, Le Cycliste.

The Routens-Hugonnier partnership ended in 1952 with Routens by now a well-established businessman. His entrepreneurial skills enjoyed little downtime and the first Routens-branded bicycles started selling that very same year. Premium models featured the exotic touches his Hugonnier-paired creations were noted for, while more economical models were produced with renewed vigor.

A true rider’s builder, Routens recognized the importance of supporting a broad market with quality products across a range of price points. He carried this ethic of universality into his 70s — straight through most people’s retirement — despite opportunities to more fully devote his remaining resources to better paying custom jobs.

As with his approach to building bicycles, Routens always maintained a strong philosophical outlook on riding them. Whether noting the extent to which tandems were more aerodynamically efficient than singles or rationalizing the use of the double triangulated tubing design he helped popularize, Routens represented all that was and is the bicycling experience across his very existence.

His innovative machinery, competitive spirit and colorful voice combined to make a strikingly unique individual who always seemed to maintain sight of the obvious. “Without team spirit,” Routens distilled in his 1951 Le Cycliste article, “it is useless to think of the tandem.” Truer words are seldom spoken. 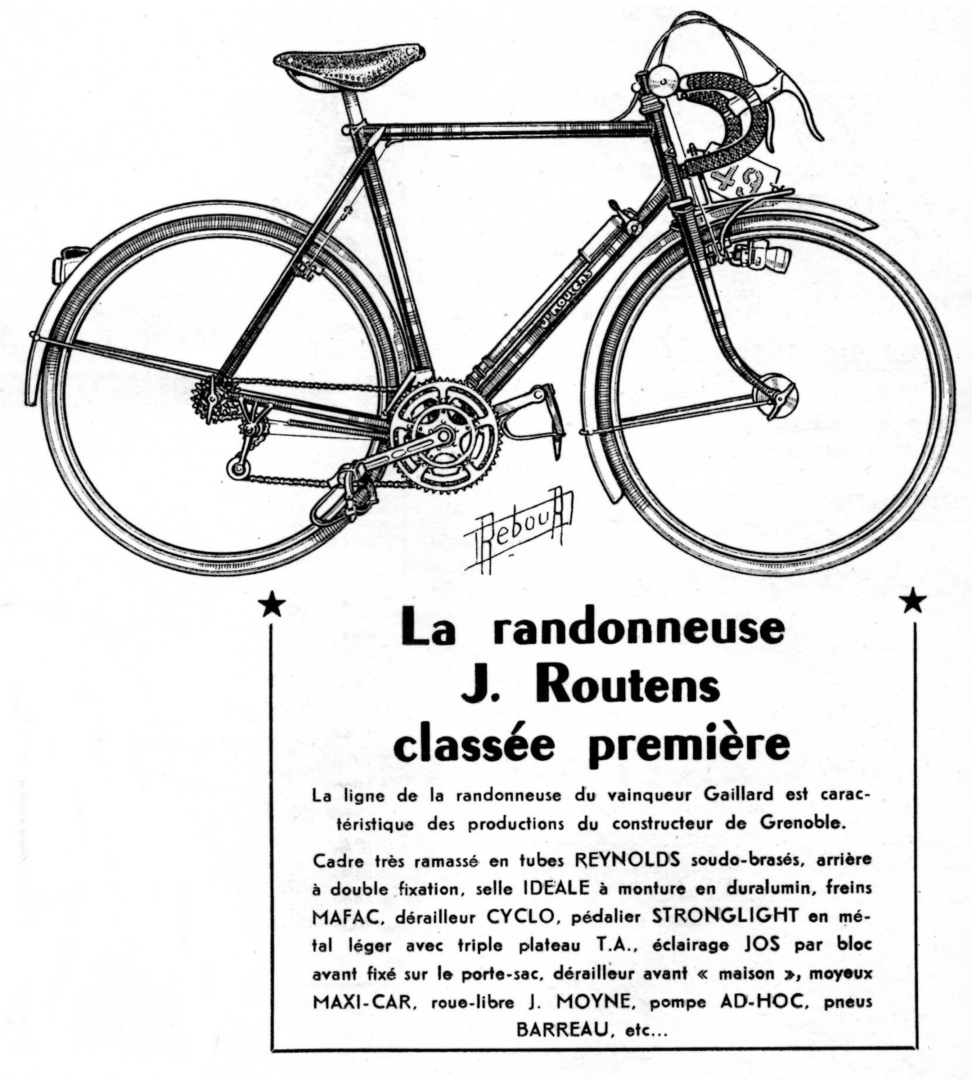 Routens passed away in 1988 at age 74. He took with him an unmatched 33 finishes in the event that started it all, his beloved BRA, including a strong finish just months before passing. Noted bicycle historian Raymond Henry once referred to Routens as an “Artisan Specialiste du Cycle de Cyclotourisme.” Add a healthy dose of “bon vivant” and another of “entrepreneur” to begin rounding things out.

Routens truly was the stuff of legends. Few in cyclotouring past, present or future will ever fill his tracks. Cycles Routens quietly continued producing world-class tandems under the hand of Jean-Paul Routens, son of Jo, until he himself retired in 2014. Today, Cycles Routens is an otherwise indistinct bicycle shop serving Grenobles locals. Perhaps those magical ingredients that first came together back in 1945 still exist there.