Bianchi is the longest continually operating bicycle manufacturer in the world. Founded in Milan, Italy by Edoardo Bianchi in 1885, the company and its trademark eagle logo have come to personify high-quality, race inspired bikes for generations of adoring cyclists.

Bianchi’s distinctive, Victorian-era eagle logo has been a registered trademark since at least the early 20th century. While its image remains imprinted on the visual cortices of many a cyclist – and those of their parents and their children, too – its origins are somewhat less clear.

The company’s first trademark on record shows a crowned eagle with a central band on which Edoardo Bianchi’s full name was inscribed dating from 1901. As providers of groundbreaking bicycles to the royal household, the Savoy coat-of-arms was subsequently added in 1905. Several permutations of the logo followed across the company’s bicycle, automobile and motorcycle divisions. Somewhere along the way, the coat-of-arms was dropped from the bicycle division’s logo and the original “eagle and band” logo reinstated, as it remains today.

The eagle’s use in Italian symbology goes back to ancient Roman times. The “aquila” was a prominent symbol across ancient Rome, especially as the standard of a Roman legion. More on its significance from Wikipedia:

Each legion carried one eagle. The eagle had quasi-religious importance to the Roman soldier, far beyond being merely a symbol of his legion. To lose a standard was extremely grave, and the Roman military went to great lengths both to protect a standard and to recover it if it were lost; after the annihilation of three legions in the Teutoburg Forest, the Romans spent decades attempting to recover the three lost eagles. No legionary eagles are known to have survived.

Thankfully, many Bianchi eagles are known to have survived. The Bianchi eagle and its meaning to the company and its legions of followers was mythologized at some early point in their symbiosis. Harkening back to days of yore, at least one artifact that helped establish this mythology lives on today.

It is a short story entitled, “The Eagle and the Bianchi Bicycle,” written back in January 1927 by an unknown author. The story details an imaginary conversation between an eagle and a bicycle, in which the bicycle convinces the all-seeing eagle of its rightful place on earth. Here is that short story in original Italian form followed in translated English form: 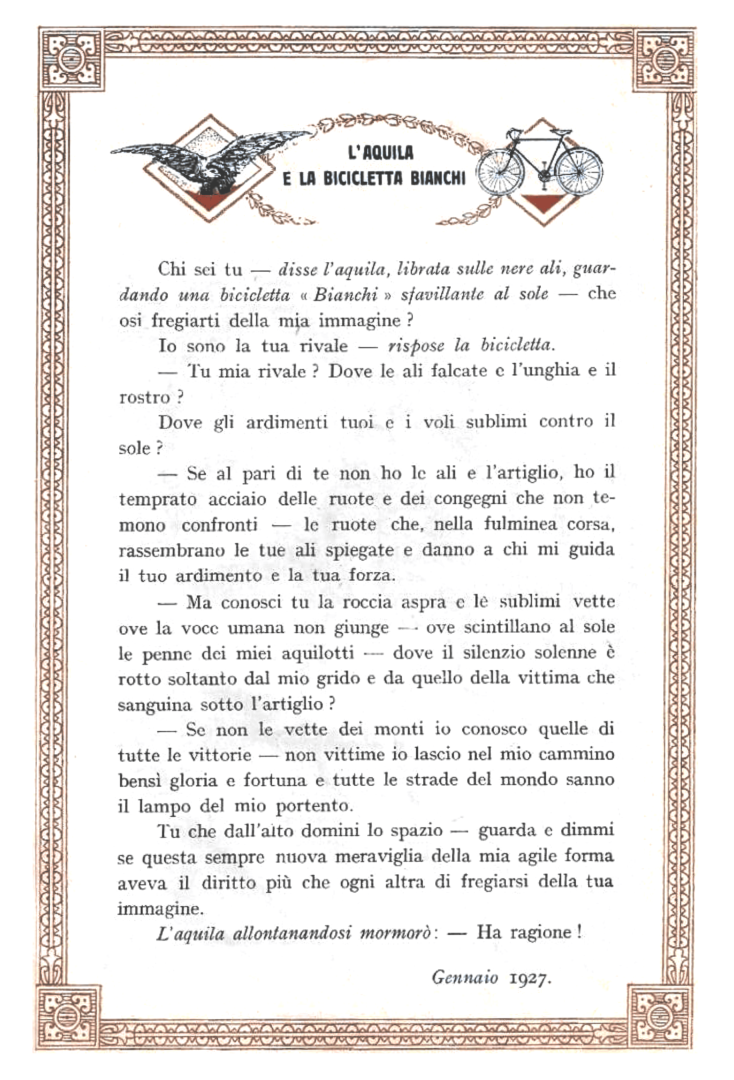 The Eagle and the Bianchi Bicycle

Who are you – said the eagle, hovering on black wings, looking at a “Bianchi” bicycle sparkling in the sun – that you dare to adorn yourself with my image?

I am your rival – answered the bicycle.

– You my rival? Where the crescent wings and the claw and the beak?

Where are your daring and sublime flights against the sun?

– If, like you, I have no wings and claw, I have the hardened steel of wheels and of devices that you do not compare – the wheels that, in the lightning rush, they resemble your spread wings and give those who guide me your courage and your strength.

– But do you know the rugged rock and sublime peaks where the human voice does not reach – where the feathers of my eagles sparkle in the sun – where the solemn silence is broken only by my cry and that of the victim who bleeds under the claw?

– If not the peaks of mountains I know those of all victories – not victims I leave on my way but glory and fortune and all the world’s roads know the significance of my portent.

You who dominate the sky from above – look and tell me if this ever new marvel of my agile form has the right more than any other to boast your image.