Since the dawn of competitive bicycle racing, Italian frame builders have produced some of the world’s most painstakingly crafted and sought after machines. Of all the Italian brands desired by bicycle aficionados, vintage Masis turn up high or even highest on the list.

One of history’s premiere bicycle artisans, Faliero Masi started his trade after racing professionally in the Giro d’Italia and Milan San Remo races during the 1930s. His competitive experience helped Masi intuit what other racers wanted in their ideal bike while fueling his own desire for perfection among other builders.

Masi spent a few years sharpening his skills at Gloria just before the Second World War. He then worked on various professional cycling teams as a mechanic through the 1940s while frequently building riders’ bikes to individual (and often scrupulously detailed) specs. By early 1950, Cicli Masi was located below the Vigorelli velodrome in Milan, Italy and producing frames for some of the most legendary bicycle racers in history. Masi, who was commonly referred to as “The Tailor,” built custom bikes for cycling titans such as Fausto Coppi, Jacques Anquetil and “The Cannibal” himself, Eddy Merckx. Although Masis were ridden by these legends, contractual obligations kept some from putting Masi transfers on their frames.

For example, Fausto Coppi was contracted with Bianchi, yet the frame he rode was actually a Masi. Eddy Merckx’s World Championship Faema bike was also born from the hands of Masi. Tom Simpson and the former world hour record holder Ferdinand Bracke both rode Masis which were labeled Peugeots. These superstars of cycling trekked to the Vigorelli in search of The Tailor, who crafted the “mystique of Masi” one relationship — and often one purpose — at a time. Early Masi models were named “Speciale Corsa” and SDBicycleGarage has a pristine and extremely rare example of a pista model from 1946. Following the Speciale Corsa, all Masis from the 1950s and 1960s were named “Special.” Frames of this era were constructed with either Reynolds 531 tubing or Columbus double butted steel with French and Swiss lugs.

Until the early 1960s, all Masis were hand made by Faliero himself. Masi frames of that era are the most collectible. Frame design and tightly controlled geometries were details Masi paid particular attention to. He built frames based on the anticipated road conditions a rider would likely encounter in a race.

When Masi built a frame for someone riding on the cobbled roads of Europe he designed it with longer fork rake angles and wheelbase for added stability and tracking. Accordingly, Masi framesets made for the U.S. market were not necessarily the same as those produced for the likes of Merckx or other European racers. They instead featured build characteristics tuned for the often better paved and less demanding roads of the U.S. countryside.

Masi also constructed frames based on individual cyclists’ needs, not the industry standardized geometries so prevalent then and today. Masi’s experience and thorough understanding of professional bike racing were significant reasons why each bike that emerged from Cicli Masi donned the coveted World Championship stripes.

His early customers were among the most demanding athletes in the world and they repeatedly won prestigious races aboard bikes born below the Vigorelli velodrome.

In 1972, Masi expanded his enterprise to the United States to take fuller advantage of the blossoming interest in American road cycling. Faliero’s confidante, Roberto, and his Verona-based sub-contractor and master frame builder, the legendary Mario Confente, also came along to help grow the business.

Masi decided on moving to balmy Carlsbad, California near the Pacific Ocean. He sold the Cicli Masi name and trademark to a group of American investors. In a previous VeloNews interview, Alberto Masi remarked that his father Faliero underestimated the market potential for racing bicycles in America.

For Masi collectors, or “Masiphiles,” the 1970s California bikes are regarded as some of the finest in company history. They had what no other builder offered the domestic market at the time: an undeniable Italian flair with a twist of custom American craftsmanship. They personified what made the great bicycles from Italy and America great — all rolled into a single package for the first time.

Master American builders like Brian Baylis, Jim Cunningham, Albert Eisentraut, Mike Howard and David Tesch were the hands behind many of the Masis built in the 1970s. Because of these various master craftsmen, California Masis had subtle differences in brazing technique, lug and dropout filing, and fork crown usage.

Alberto Masi also built Gran Criterium frames in Milan during the mid to late 1970s but the California models were regarded by many as higher quality.  Masi California frames of this period are described by modern collectors as “extraordinary” and “spectacular,” made in the “spirit of the Italian master but with the crispness of an American custom.”

All of the Olympic medalists and most all of the World Track Champions who won their respective titles aboard Masi frames did so on Masi California frames. California Masis were labeled on the bottom bracket with a “MC” designation followed by the frame size and serial number. Italian built frames had a “M” designation followed by the frame size, with the serial number on the fork steerer.

Bob Hovey’s Masi tribute site and Greg Fletcher’s Masi Lore site host a wealth of information on identifying and dating California Masis. Some of the information there was provided by Brian Baylis, longtime Masi employee in the 1970s and former proprietor of Baylis Handmade Cycles.

Of all the visible personalities who rode Masis in the 1970s, Dave Stoller was perhaps the most recognizable in the United States. His Ferrari red 1978 Masi Gran Criterium — a model originally introduced in 1970 — was unmistakable in the Oscar winning movie Breaking Away. The images of Dave cruising through Morgan-Monroe Forest near Bloomington, Indiana, and racing against the infamous Italian Cinzano team converted thousands of young Americans into cycling disciples. The greatest number of Gran Criteriums were built at the Carlsbad facility in the 1970s, with Breaking Away helping propel the model to become Masi’s most popular ever a few years later.

According to Indiana University… the Little 500 bicycle race began in 1951 as a fundraiser for scholarship money for working students. The race was created by the late Howard S. “Howdy” Wilcox, who patterned it after the Indianapolis 500, which his father had won in 1919. He was inspired by a bicycle race he saw involving students racing around a dormitory, with several women leaning out of windows and cheering them on.
Breaking Away Trivia on IMDB

Like James Bond and his clever Aston Martin, The Bandit and his tire-scorching Trans-Am, and Marlon Brando and his rebel Thunderbird, Dave Stoller’s Gran Criterium was the envy of all then-modern day heroes. It was so incredible the bike enabled its Cutter rider to achieve 60mph drafting behind a Cinzano semi — while in its small chainring! 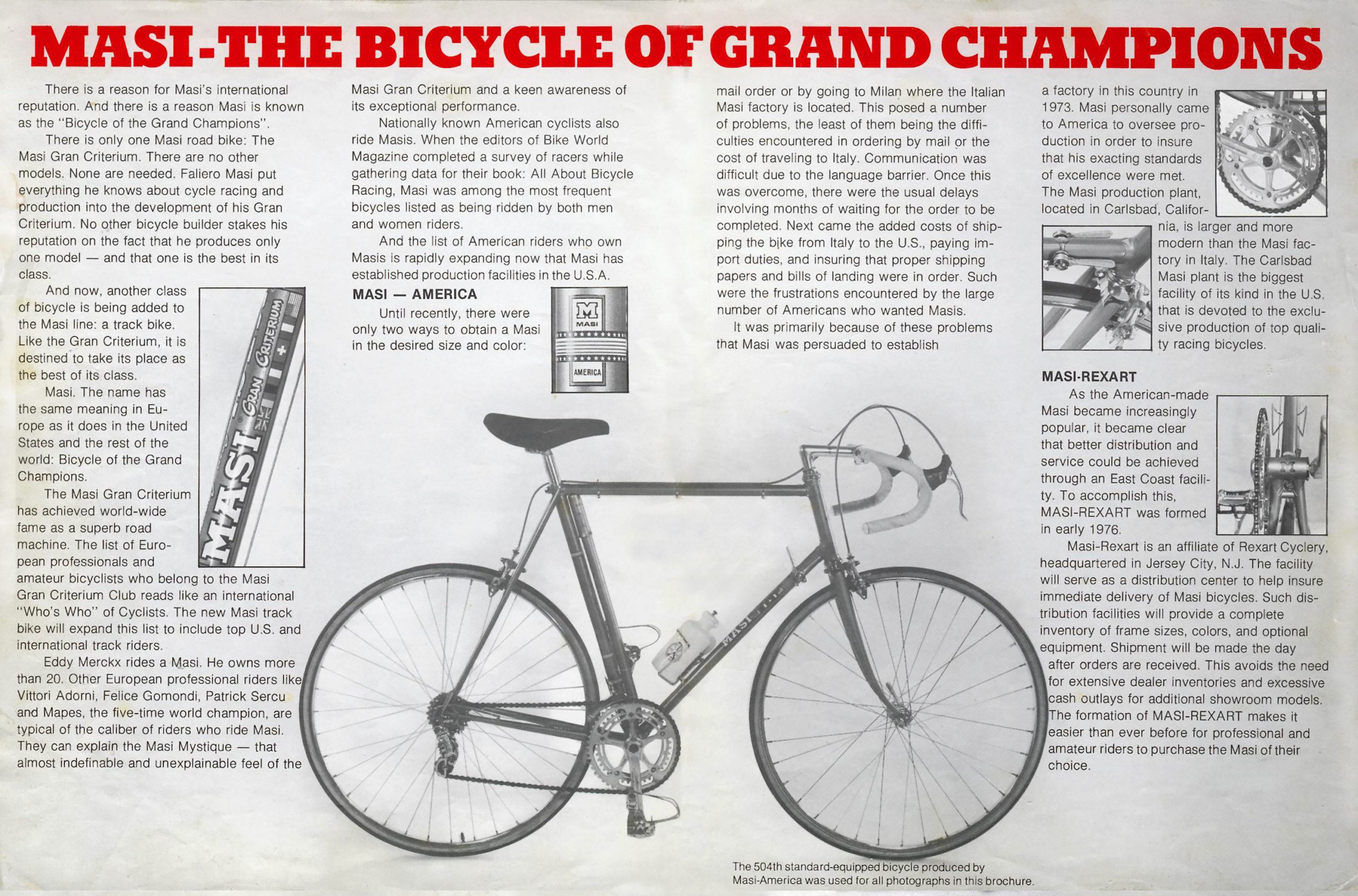 Bianchi couldn’t do that. Neither could De Rosa. Was it the magic of movie making, or was it simply the legend of a Masi? Either way, a nudge from Hollywood helped turn the mystique of Masi into the most desirable racing machine the cycling industry had ever produced.

While Masi was being introduced to the growing U.S. cycling masses, Faliero returned to Italy upon becoming disenchanted with the American lifestyle. He ran most business operations from Italy while production continued in California.

Before long Faliero stopped visiting the U.S. facility and retired from the cycling business altogether, no longer attendent to his now-famous shop in Milan. Faced with the prospect of ending his family legacy, Alberto decided to reinvigorate the Masi brand along with its legendary space beneath the Vigorelli.

Alberto’s philosophy of producing fewer than 800 handmade frames per year contrasted sharply with the mass production ambitions his American backers had in mind. This led to a well publicized and heated breakup between Italian and American counterparts, and the vaunted Masi family soon found themselves unable to continue selling bikes by their own name in the United States.

Prior to Faliero’s retirement and rift with the company in the late 1970s, Alberto introduced the Prestige model in 1975 as a modernized version of the Gran Criterium. With a more modern and sterile design featuring micro-fusion investment cast lugs, it was only imported to the United States in small numbers by special order thru Masi Worldwide/High Country imports. The good folks at Cicli Corsa Classico show a particularly beautiful example of the Prestige model from 1975 here, much like Cicli Berlinetta shows a beautiful example from 1978 as below.

Because California Masi owned the distribution rights to the Masi name, Alberto was unable to put his Prestige model in the hands of wanting American buyers. For that reason, Prestige framesets remain very desirable today in the U.S. market.

By 1980 many thought the “golden era” was over for Masi. In what was perhaps the most significant contribution to era framebuilding, however, Alberto introduced the 3V Volumetrica in 1981. The Volumetrica was the first frame to feature internal lugs and oversize tubing on a steel frame.

It was such a transcendent design that Masi started producing custom frames for more modern champions like Claudio Chiappucci, Miguel Indurain and Greg LeMond. The Volumetrica was and still is one of the most nimble and stiff bikes ever made.

Much like the fabled Mercedes 300SL Gullwing, the Masi 3V Volumetrica was 20 years ahead of its time in design and execution. Although revolutionary, the Volumetrica was a distant cousin from the forgiving Cadillac-like ride delivered by the Special and Gran Criterium models. The Volumetrica was a no nonsense, stiff-as-triple-starched-dress-shirt ride that delivered razor sharp performance.

If teeth chattering in the back of one’s head on poorly paved roads was a tolerable thing, the Volumetrica was your fastest choice. Classic Rendezvous has a great Bicycle Guide road test of the Volumetrica from the late 1980s. The 3V Volumetrica model was so successful it was still offered by Alberto and company a full 25 years after its introduction. Masi 3V Volumentricas were imported into the U.S. market thru Masi Worldwide from 1984 to 1987 as bonafide Masi 3Vs in name. From 1988 onward, Joe Starck built 3Vs in the United States bearing the Milano 3V name badge to commemorate the city in which Cicli Masi had originated.

“American 3Vs are distinguished from Italian 3V’s by different decals and the use of a different fork crown and dropouts. Another (cheaper) variant, the Team 3V, was later built for Masi USA under subcontract by Mondonico. Small numbers of US 3Vs continued to be built by Ted Kirkbride in the ’90s, and Ted says they are still available today.” With headquarters remaining outside of San Diego, Masi Bicycles has grown into a mature company taking full advantage of mass-produced assembly line manufacturing practices. The pressures of competition and a global economy have forced Masi Bicycles into becoming a company far different from the days of Faliero.

Masi bikes are still the ultimate in high technology and advanced design — but the mystique of a modern Masi remains a far cry from that conjured by The Tailor and his apprentices. That observed, it seems the good people at Masi Bicycles remain aware of their brand’s history and timeless appeal: the Gran Criterium model introduced way back in 1973 remains available and popular today. The Tailor would be proud.

Breaking Away on IMBD