When first contacting Stronglight for information about the company, I received a charming but curious response. My requests had included, naturally, a timeline, a list of events the company sees as particularly important in its history, the position the company sees itself occupying in the present and future of cycling, a bit about its marketing practices, and an explanation of why a French company has an English name.

The answer to that last question was most amusing: my contact, M. Perard, explained (I had written in French) that the English word “strong” means “solide,” while “light” means “leger” (which I think I knew), and that they had obtained the name from another company with which they had become allied. Which really didn’t answer my question, but did lighten my day a bit. Equally amusing was the timeline he sent. The first entry noted that the original parent company was founded in 1903. The second entry casually jumped to the reorganization of the company in 1993. It seemed, somehow, there was something missing, so I knocked a little more rust off my French dictionary and wrote back. M. Perard’s second letter was considerably more detailed than his first, and finished with the following wry observation:

Nevertheless, what came before then remains significant to us, and so we will keep our eyes in the mirror for a little longer… 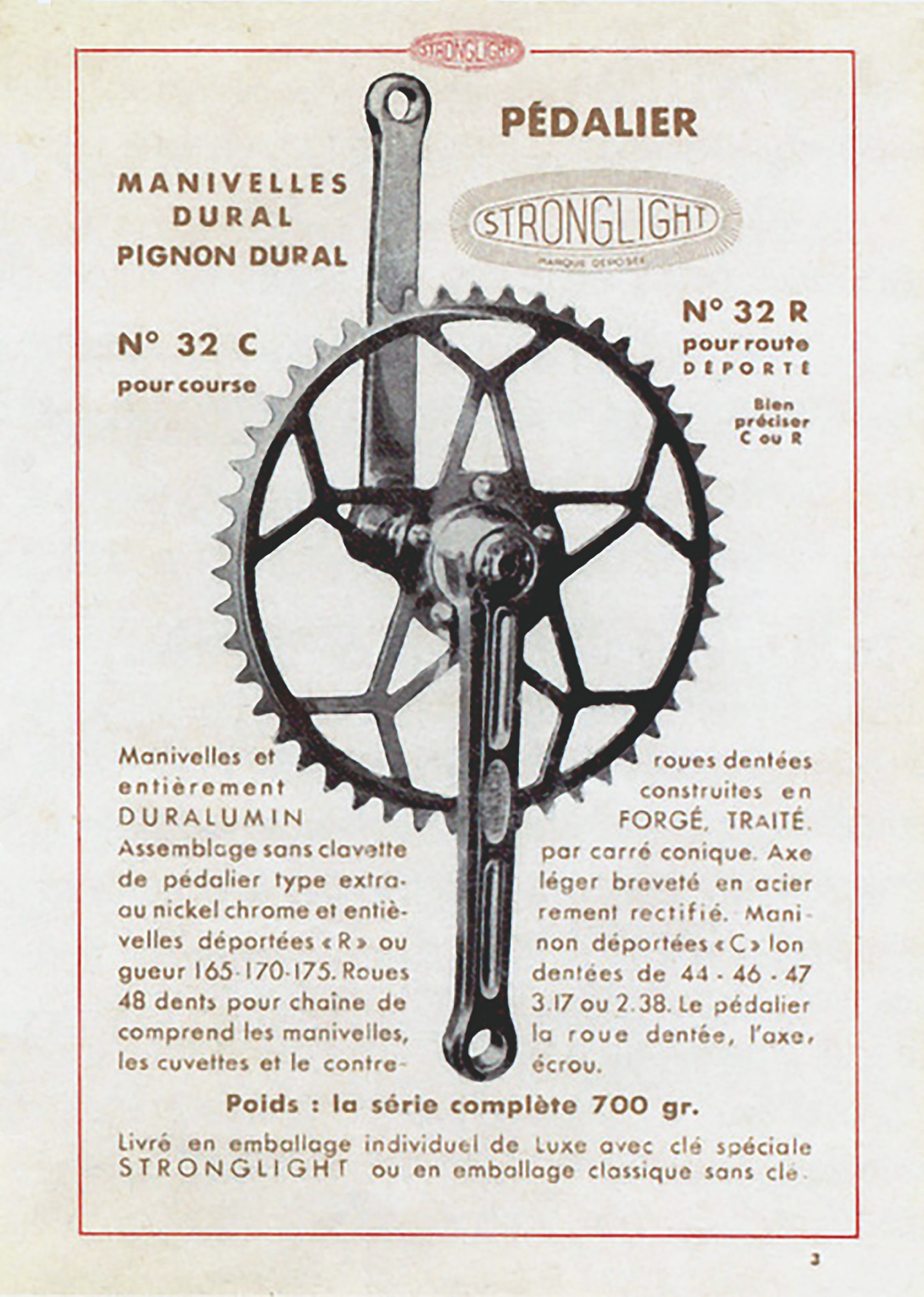 The company presently known as Stronglight began in 1903, when it was first known as Haubtmann. Haubtmann started out by manufacturing a high-end line of steel cranksets — originally cottered, of course, first under their own name and then under the Solida name. They continued doing so rather successfully for the next seventy years or so, outfitting many a mid-range lightweight along the way. 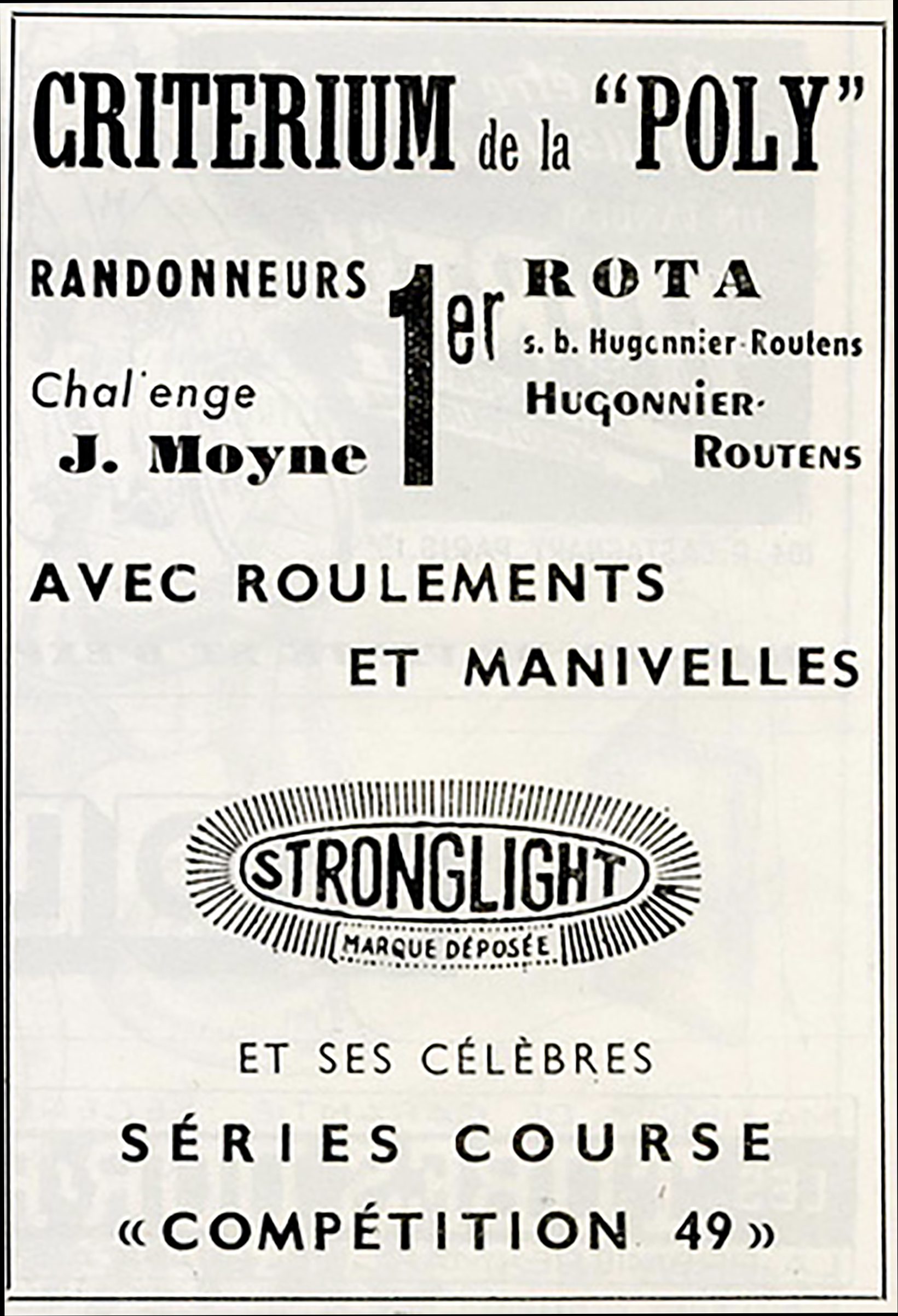 In the 1970s, about the same time that aluminum was becoming the material of choice for cranksets, Haubtmann merged with another company named Verrot Perrin, which had devised and trademarked the name “Stronglight” around 1933. They came up with this name for their square-taper crank, which went on to become the universal crank-to-bottom-bracket interface standard for all but the crappiest bikes for decades, and which still predominates today.

Their goal was primarily to offer a prestige line of products for aftermarket sale, as well as more ordinary fare for era manufacturers who wanted house-brand components, which included such respected marques as Peugeot, Hirondelle and Mercier. Yes, those Peugeot-branded parts on your trusty PX10 were probably made by Stronglight. The late 1970s and early 1980s marked a giddy time for the French bicycle industry, feeding tens of thousands of Peugeots, Gitanes, Motobecanes and other less memorable names into the maw of the Great U.S. Bike Boom. It was a time when almost any bicycle would sell, as domestic denizens responded to new paradigms of environmental awareness and populist athleticism.

They reacted to these cultural shifts by flocking to bicycle shops and snapping up hordes of freshly-discovered (in North America, at least) lightweight derailleur bicycles. Sadly, these are often the same bikes vintage buffs now pick up for ten or twenty dollars in thrift shops, after spending many a dusty and forlorn year leaning up against the ivy-covered wall behind the garage. Then came 1985, which brought a burgeoning Asian bicycle industry to U.S. shores for the first time. The mid-80s were golden years for the Japanese road bike, and bore witness to the earliest stirrings of the Taiwanese manufacturing giants. The sudden craze for mountain bikes also caught the French bicycle industry unawares, with pioneering companies like Gary Fisher Mountain Bikes, Ritchey Design, Specialized and Trek coming into their own around then. 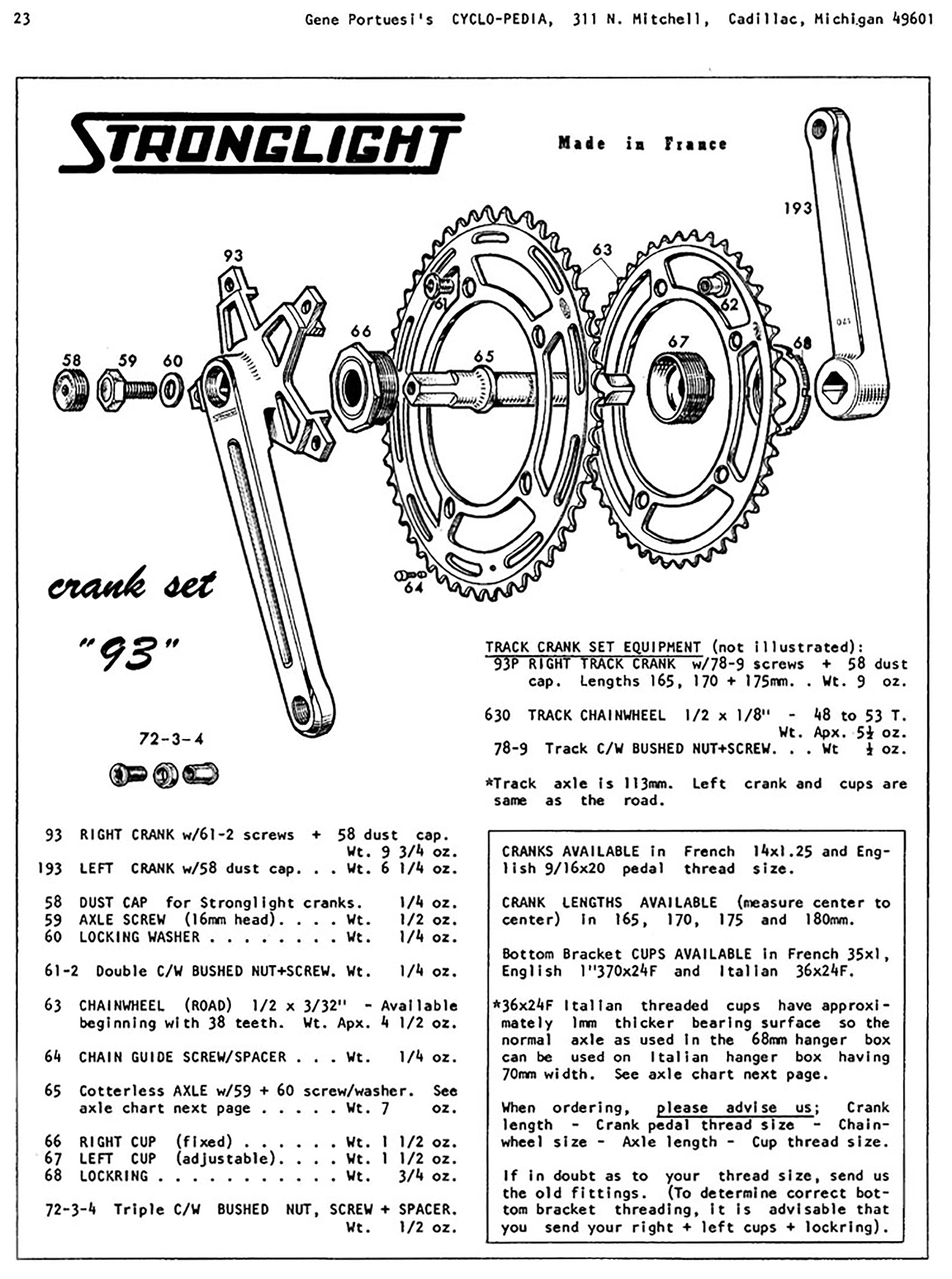 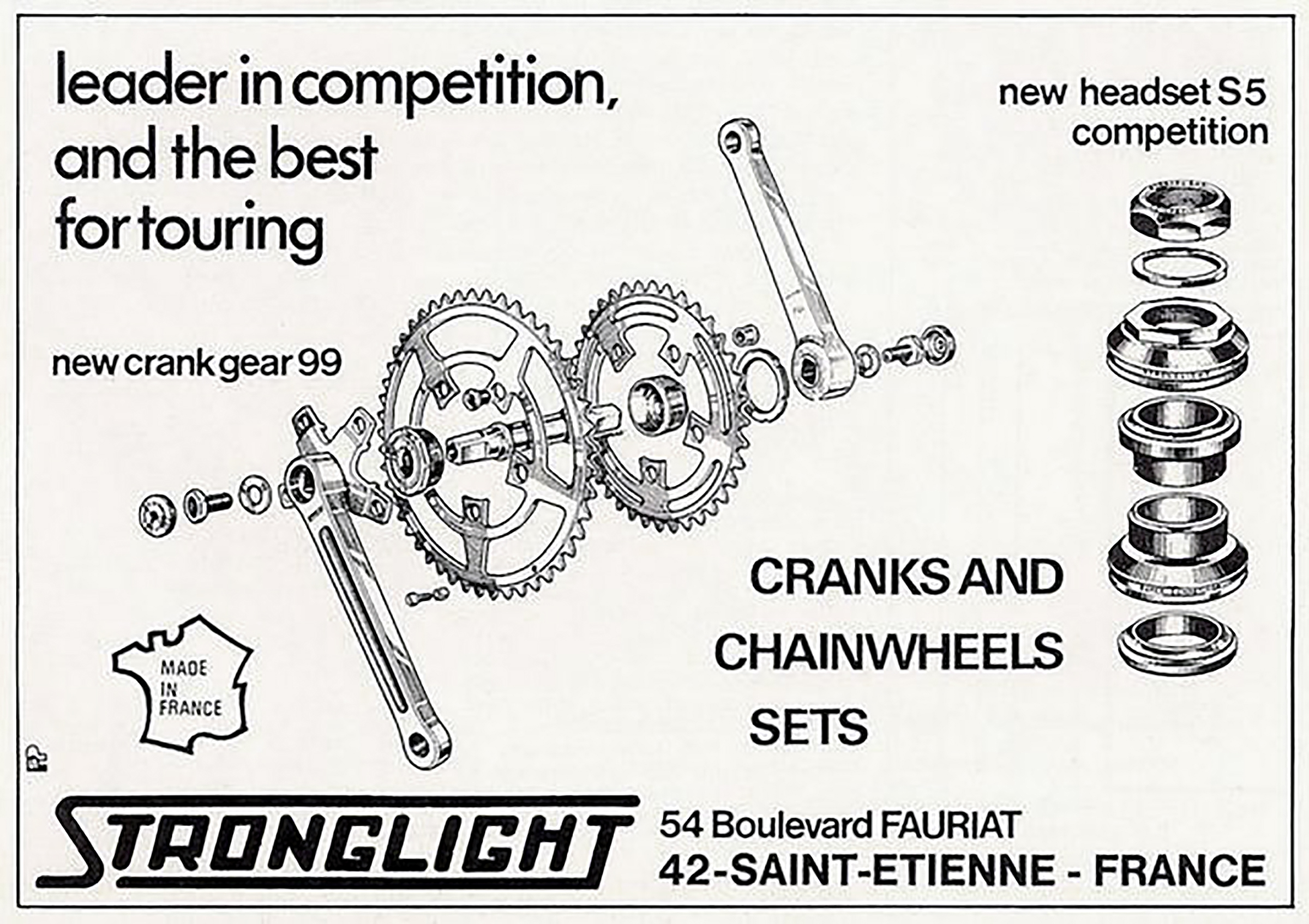 Artisanal builders remain in France and are still much respected — Cycles Alex Singer foremost among them. But the great factories are gone and what “French” bikes one sees now are generally made in China. 1990 was, in M. Perard’s words, a “black year” for Stronglight, with capitalization diminishing as the business struggled. In 1993, the company declared bankruptcy only to be purchased shortly thereafter by an investment group and pool of former employees who revived the brand under the same name. The new focus at Stronglight was the same as the old focus at Stronglight: emphasize high-end aftermarket components, which are now primarily manufactured through CNC processes, without neglecting the volume production of “city bike” level parts still manufactured using cold-forging processes. As before, the emphasis would always be on technologically advanced, competition-level componentry. No grass will grow under this company’s wheels.

History remains, nevertheless.  Stronglight model 49 and 49D cranksets are the most venerable cranksets ever produced. By 1957, they had already propelled bicycles ridden by 19 world champions in Road, Sprint and Pursuit disciplines. They were also used by the winners of every major cycling event at the time: Tour de France, Hour Record, Olympic Games, Paris 6 Day, Bordeaux Paris, Tour of Belgium, Fleche-Wallonne, Liege-Bastogne-Liege, Paris-Nice, not to mention their prominence at the Belgium, French and Swiss Championships. Stronglight 49 and 49D cranksets really are the stuff of legend. HubJub, a British shop emphasizing fixed-gear bikes, remarks of Stronglight that its “classic 49D still has staunch adherents among cycletourists — an amazing record for a crankset introduced in 1949.” They also opine that some current Stronglight cranks are actually manufactured by Sugino! (This would be seen as outright heretical to some, but imminently practical to others).

I contacted Stronglight regarding this rumor, and they answered that, indeed, the crankarms on one of their models is made from blanks bought from Sugino, but which they finish “properly,” and with which they only use Stronglight chainrings. Good thing, too.

Stronglight produces among the most durable and varied chainrings available. They are especially popular among riders in disciplines like BMX, time trialing and track riding. They come in a rainbow of colors that can make any bike look slick and they seem to last longer than other chainrings on the market. Plenty of original mid-century Stronglight cranks still have their original chainrings on them. Stronglight is also known for their quality headsets, especially their P3, V4 Competition and S5 Super Competition hardened steel models. Since at least 1949, Stronglight has also pioneered the use of needle bearings in headsets, including the “X-type” headsets, in which barrel/roller/needle bearings are aligned back-to-back (symmetrically), providing a little more spacing between individual bearings and improving the stability of the steerer tube in doing so. So what is Stronglight up to today, in the early years of the new millennium?

Despite their all-too-recent difficulties, the company is going strong again, with 55 employees, a valuation of some 6 million euro, and roughly 80% of its production sold in export markets. In 2000, the company joined with another great French cycling company, Zefal, while still keeping its distinct identity and organization intact. Stronglight did manage to carefully exploit the financial resources of its new “uncle” by upgrading machinery and extending its reach into new markets where Zefal already had a meaningful presence. Indeed, the new machinery — laser-cutting devices, CNC mills, high-tech lathes and other CAD-driven tools – – underscores Stronglight’s insistence on remaining a forward-looking company, ready to not only respond but to initiate change in the bicycle component industry. With their capacity to work metal from start to finish and more recent experience in applying computer-modeled design paradigms (after a similarly heavy investment in software) to componentry manufacturing, Stronglight remains a fully integrated studio/factory — an “atelier” in both the oldest and newest senses of the word.

So what do they offer today? I will venture a list, knowing they might revise the lineup tomorrow, and skipping over their more mundane (but still visually elegant) lines designed for “city bikes” in favor of the whiz-bang stuff we all dote on:

And despite Stronglight’s love of racing (and commitment to it: they sponsor a team), their obvious infatuation with and mastery of high-tech, and their aggressive promotion of their products to Tour de France racers, Stronglight remains grounded enough to include a link to the little village of St.-Etienne on their website, the birthplace they have never left. 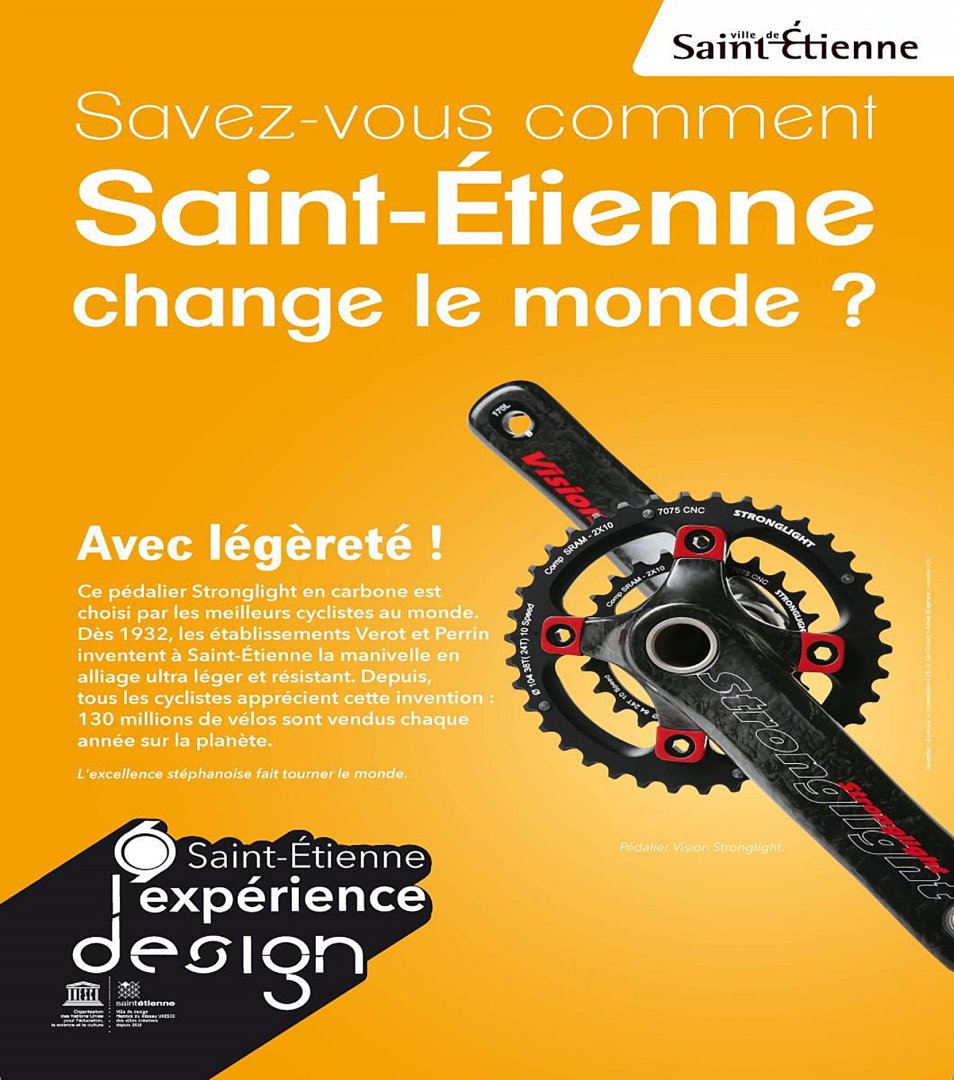 Eyes on the future, feet on the ground: Stronglight endures as a good and necessary citizen of the original bicycle nation. Vive le vélo! Vive Stronglight!